Virtual Reality in online surveys – Does it work?

As we all know, online engagement is progressing at breathtaking rates – and can be leveraged for use in market research. Researchers at O2 and Gorilla in the Room have published a paper describing the use of a Virtual Reality (VR) tool within their online survey, with some interesting results.

The authors of the study describe the perennial burden of survey design, namely ‘respondent burden (Bradburn, 1977) – a combination of interview length, the amount of effort required, the amount of emotional stress endured, and frequency in which they were required to take part in the research. The major antidote to respondent burden is finding what motivates respondents to participate in a survey – something that virtual reality – with its immersive and malleable interface, might be able to achieve, despite the use of virtual reality for commercial research being very much in its infancy.

Recent research has focused on making surveys more enjoyable, and even more engaging through gamification (Sleep & Puleston, 2011) – although, again, there are some concerns about the effect of these modifications on a survey validity and reliability.

This study was designed to measure the effectiveness of in-store communications around a product that allows users to monitor their home remotely and manage energy usage from their mobile phone. It was acknowledged that, while the VR component of the survey may add to respondent burden – in navigating the instructions and using the headsets – this would be offset by the positive aspects of engagement. The ‘respondent burden’, it was hypothesised, would be offset by the immersive and interesting nature of the VR.

So how did the process work? 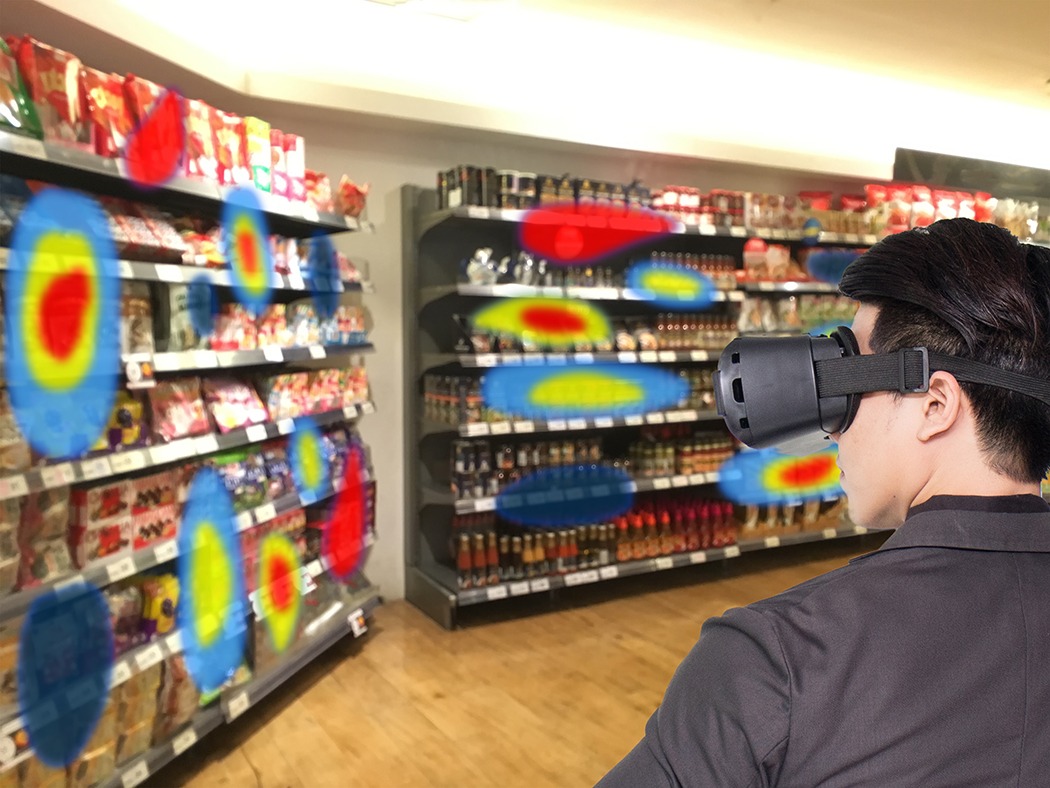 In the experimental group, participants were mailed a Google VR headset and given instructions about how to view the video. The video had been filmed using 360 degree cameras in a fixed position and allowed the viewer to explore the store in any direction, as to best mirror how they would move around a physical store.
Participants were shown one of five product bays advertising the product, that had been altered in a number of ways. An in-store radio station was playing in the background to further enhance the immersive experience. It should be noted that a control group was shown a film of the store in normal 2D format along with the survey.
Respondents were asked to view the film and were given 50 seconds to explore the store (either in VR or with normal film) , and were then asked a series of questions about recall and message takeout.

What did they find?

The results of the study were a bit hard to decipher, as they didn’t actually report on the differences between the modalities and recall of the product – but the study did find that significantly more respondents in the VR condition reported that they found the survey ‘very enjoyable’. Additionally, 88% of respondents indicated that they would be interested in doing more VR surveys in the future – a definite bonus for researchers.
The researchers also found that, contrary to their expectations, most participants were able to easily use the VR headsets and integrate them with their smartphone devices.

Of course, a study like this is going have limitations – and there were several, including the sample being drawn from an industry group, some less-than-ideal survey experience questions, as well as respondents being limited to those who already owned VR-capable smartphones.
Nevertheless, the results indicate that VR could be a useful technology for use in future market research – in terms of giving respondents an engaging and immersive experience in which the benefits outweigh the costs of time and effort.

So how is this relevant to what we do? According to Kahneman, the father of behavioral economics, (2011), our responses when immersed seem potentially more likely to correspond to actual behaviors. Add this to the good acceptability of VR by survey participants, and we have a survey modality that could inform future market research. In the future, with augmented reality and more advanced technology, respondents may be able to pick up items, see how products might look in their homes or even on their bathroom shelves.
What kinds of uses can you see VR having in your company’s work, whether this is engagement in surveys or other areas such as training or development? Please feel free to comment below.

PrevPreviousIt’s not your fault if you’re not a ‘computer person’. Why design matters.
NextDesigning for an uncertain futureNext

To date more than 30 million surveys have been created using Evolved Human Listening™.  It is the trusted platform used by local and global brands that demand the highest levels of resilience, robustness and data security.